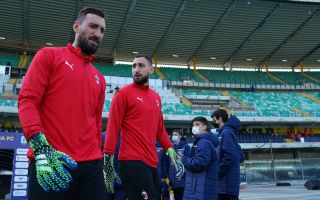 Chelsea are also said to be interested in the Italy international, aged 22, who could spell danger for Dean Henderson’s long-term hope of becoming United’s first-choice goalkeeper.

The Transfer Window Podcast regularly appears in the gossip columns because journalist Duncan Castles is co-host. He claims the AC Milan keeper current earns €6m net a year – after tax, but he’s now seeking €10m-a-year to renew at San Siro.

There seems to be growing uncertainty over David de Gea’s future, as per The Sun, and I can’t help but wonder why they would target a keeper like Donnarumma if they fancied Henderson to replace the Spaniard?

“Our information of course is that both Chelsea and Manchester United have been in talks with Raiola regarding Donnarumma.”

Raiola has the reputation of an agent who will do all he can to reach his client’s demands and he’d have no problem pulling Donnarumma out of Milan this summer. The podcast adds that Milan have offered the keeper €7.5m-a-year which is €2.5m short of their demands.

The news is timely with United hosting Milan in the Europa League tomorrow night.

I like Henderson and think he deserves between now and the end of the season to prove himself as first choice. He is set to start his third consecutive match with David de Gea still away on paternity leave.