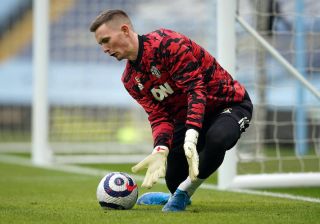 This morning I was sat having a coffee and listening to the Stretford Paddock Podcast.

I don’t listen to many Manchester United podcasts (I spend enough time planning, recording and editing our own) but the lads over at the Paddock do a really good job raising debate around the club we love.

Stephen Howson joins Jay and Joe as they look at United’s recent form defensively after collecting a fifth clean sheet in 6 games.

Jay says something 4 minutes in which I wholeheartedly agree with, and I wanted to raise it on the blog this afternoon in hope of getting some reactions in the comment section.

He references a throw from Dean Henderson in the derby, which later led to Luke Shaw’s goal to make it 2-0, and argues that David de Gea is too slow when it comes to starting attacks from the back.

“I think it’s that close now that I’d actually give the edge to Dean Henderson,” Jay elaborates on the Stretford Paddock Podcast. “This isn’t a reaction to just from yesterday’s performance [Manchester derby]…

“I think we’re at a place now where Dean Henderson deserves to start.”

Let us know if you think United would collect more points between now and the end of the season with Henderson between the sticks?