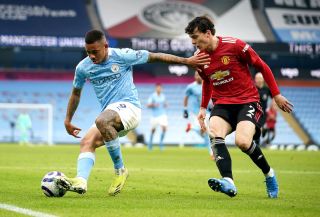 Manchester United ended Man City’s 21-game winning run with a 2-0 victory at the Etihad on Sunday, and two of Ole Gunnar Solskjaer’s players did enough to make Premier League team of the week.

The XI is selected weekly by BBC Sport columnist Garth Crooks and I don’t think many of our readers will disagree with the two United players he picked this week.

We haven’t praised United defensively very often this season, but the Manchester derby saw us withstand pressure from one of Europe’s most potent teams in the final third. Luke Shaw is playing some of his best football yet, while Victor Lindelof has a knack for showing up on the big occasion.

The Swede is not convincing alongside Harry Maguire most weeks and United still need to dig into their pockets this summer, but it would be cruel to take any credit away from him after his display against City.

Hopefully he can build on this form because United need to win football matches.