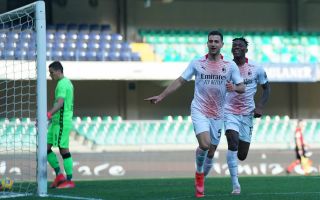 Diogo Dalot’s agent has provided an update on his client’s future.

The Portuguese full back struggled for playing time at Manchester United before leaving on loan for AC Milan this season. They’ve managed to mount a title challenge with rivals Inter in Serie A so it looks like he will benefit from his time in Italy.

It could be argued that he is finally showing real promise this term, but time will tell when his loan deal expires and if Milan try to sign him permanently.

There’s no guarantee if his form will persuade United to give Dalot another chance at right back. Aaron Wan-Bissaka is miles better and I think he needs stiffer competition from an attack-minded full back.

His agent hardly expresses a strong opinion on the matter, saying (via Calcio Mercato): “I spoke to him [Dalot] yesterday, he was very happy, for the game and for the goal scored. It was very important for the team and for him. It’s always nice to play well and get one in the net, as it did in Verona.

“When he came to Milan, he knew he was arriving at a great club for history and tradition, one of the best in the world. For this, he chose the Rossoneri.

“And when you play for a team like this, it’s normally to compete for the Scudetto. There’s an excellent relationship with Ibrahimovic and the other teammates, he’s happy in Milan.

“Thursday will be a very special match for him. Right now he’s a Milan player, on loan from Manchester United, but he wants to do well for his current club. If he had played with another team, it wouldn’t have been different anyway.

“At the right time, this will also be discussed. He has to train at his best and take advantage of every opportunity, the rest will be seen. There’s no contact now, but it’s normal. The focus is all on the field. Later we will talk about it and we’ll see what happens.”

Dalot is eligible to play against United in the Europa League on Thursday night, but it sounds like Zlatan Ibrahimovic will be out injured. I know we’re playing in a second rate European tournament but it’s always a relief when our defence doesn’t come up against someone like the Swedish veteran.