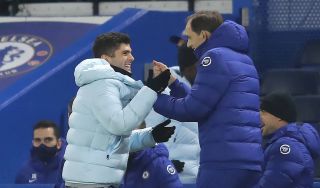 Manchester United are on alert over a possible move for Christian Pulisic, according to the Daily Mail.

The Chelsea winger is yet to start a match under new manager Thomas Tuchel and it is suggested he could leave Stamford Bridge if there isn’t an improvement in playing time soon.

The report claims United, Liverpool and Bayern Munich are all possible suitors for the USA international should he move this summer.

A lot can happen between now and the end of the season at Chelsea, so I wouldn’t be getting over excited about this news. It’s a strange one because the pair worked together at Borussia Dortmund, but so far Tuchel has given the opportunities to other players.

Under Frank Lampard, who Chelsea fired before appointing Tuchel, Pulisic hardly set the stage alight. He’s a good player but nothing more than that.

If United are to sign a winger this season, I hope it’s Jadon Sancho. A super player who should be looking for a new home to decorate with trophies.

Let us know who you want United to sign?