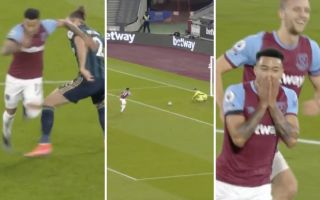 Manchester United loanee Jesse Lingard won and missed a penalty for West Ham against Leeds – but he was well placed to convert the rebound.

The midfielder was out of favour at Old Trafford prior to his loan switch to West Ham, but has been a revelation since joining the Hammers on loan in the January transfer window.

He is reminded everyone what he is capable of and David Moyes deserves utmost credit for giving the England international a chance. The question now is can he play into Gareth Southgate’s summer plans?

Lingard fluffed his lines from the penalty spot but didn’t make the same mistake a second time after he converted the rebound to find the back of the net.

Do you think Lingard has a future at Manchester United?