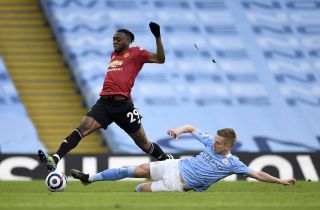 Aaron Wan-Bissaka was brilliant against Manchester City on Sunday.

The right-back is the only United player to make WhoScored’s Premier League Team of the Week, while Luke Shaw and Victor Lindelof made the BBC’s equivalent.

Wan-Bissaka earned a rating of 7.76 for his performance versus City.

He made five interceptions, three clearances and three tackles as United kept a clean sheet with Dean Henderson between the sticks.

📝 Click the image to read the full reasoning on the XI 👇

While I would argue that United should sign a right-back in the summer, I can’t see anyone but Wan-Bissaka being our first choice in the position for many years to come.

Best United right back since Gary Neville but still some developing to do.