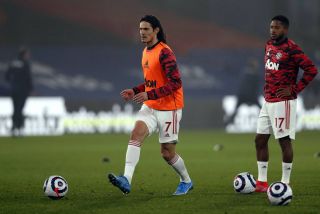 Quotes from Edinson Cavani’s father are doing the rounds and he suggests the Manchester United striker plans to quit Old Trafford in the summer.

Luis Cavani has told the Argentinian press that his son, 34, wishes to join Boca Juniors this summer to order to be closer to home in South America.

The Uruguay international joined United on a free transfer last summer and has scored six Premier League goals this season.

It hasn’t always been a happy spell for Cavani, with the FA giving him a three-match ban earlier in the season for a post he shared on Instagram.

His father claims that incident left the former PSG forward wanting to quit.

He said, as per talkSPORT: “My son does not feel comfortable in England and wants to be close to the family again.

“Edinson is going to end up playing in South America.

“I want Edinson to play in a team that fights for something important.

“Edinson had many conversations with Riquelme and he would like to play for Boca.

“He was always seduced by the idea of playing for Boca.

“If he returns to South America he is leaning towards Boca.

“By the middle of the year he will return to South America.

“My son’s idea is not to continue there, he wants to return.”

Luis Cavani makes it very clear that his son wants to leave United this summer, but we are also basing this on translated text.

The source isn’t verified on Twitter but has over 400k followers.