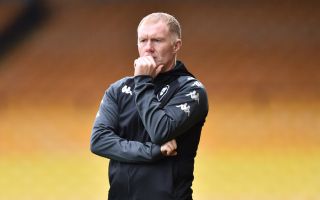 Former Manchester United midfielder Paul Scholes has sent Aston Villa star Jack Grealish a plea to leave his Midlands side for the sake of his own career.

Scholes, now retired, turned out for United for 22 years (2001 – 2013) during a career that saw the English lift multiple trophies, including 11 Premier League titles.

Throughout his playing days, the legendary midfielder racked up well over 700 senior appearances for the Red Devils.

The Old Trafford legend’s fine on-field contributions saw him claim the illustrious PFA ‘Player of the Year’ award on two different occasions (2002-03 and 2006-07).

Speaking about who could be in line to claim the award this season, Scholes has highlighted Grealish a potential candidate but acknowledged the playmaker is unlikely to win the award whilst playing for Villa.

Grealish, 25, has been relentlessly linked with a stunning switch to Old Trafford as the Red Devils continue in their quest for a top-tier attacker.

However, whilst speaking in a recent interview Optus Sport, Scholes has revealed how the 25-year-old must secure a transfer in order to take his game to the next level.

“Don’t get me wrong, I love the player,” Scholes said (as quoted by Metro) “But if he was doing this at Man United, Liverpool, City, one of the top clubs, then he’d be up there, he’d possibly be top three [in running to win PFA ‘Player of the Year’].

“There is no pressure on Villa. If he is at a top club then he needs to win every week. ‘He needs to leave Villa to prove that (he is a top player).

“Jack Grealish is probably the same (as Paulo Di Canio). It is all about him at Aston Villa. He needs to get out now to a club that need to win every week, there is pressure to deliver trophies. He is capable of doing it, but there will always be a doubt until you do it.”