Manchester United’s Premier League fixtures continue to come thick n’ fast with the Red Devils’ next clash set to be against Crystal Palace on Wednesday.

United come into the mid-week clash off the back of a drab 0-0 draw against Chelsea and will be hopeful they can get back to winning ways.

Despite failing to score in their last two matches, in all competitions, the Red Devils will undoubtedly fancy their chances against an out-of-form Palace side.

Ahead of the important clash, we have predicted how we expect Ole Gunnar Solskjaer to line his Reds up. 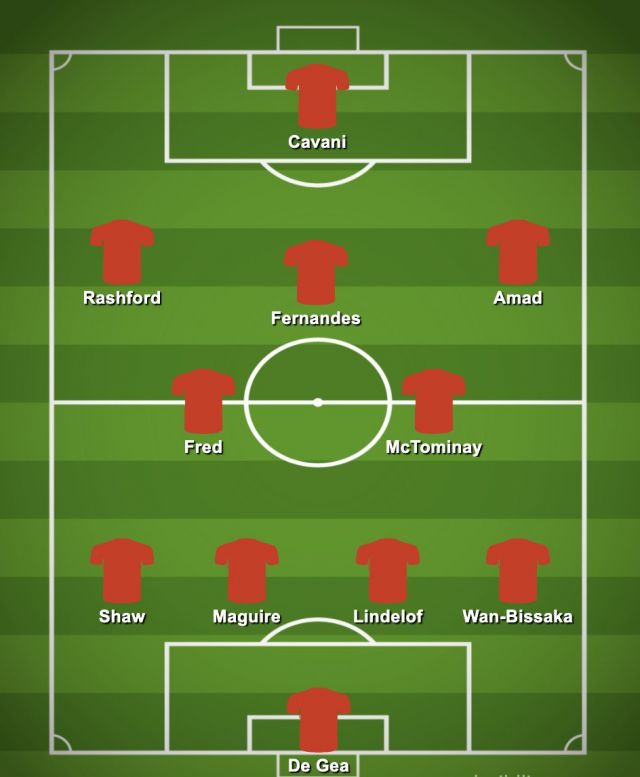 A familiar back-five is likely to be the go-to from Solskjaer, however, at the time of writing this, the outcome of the FA’s ruling regarding Luke Shaw’s referee comments has yet to be determined. Therefore, should the defender be handed a ban, Alex Telles is likely to come in at left-back.

In light of Paul Pogba’s absence through injury, a midfield trio of Fred, McTominay and Fernandes poses a threat to Donny van de Beek continued exclusion.

However, at the attacking end of the pitch, striker Cavani could be in line for a return from injury after a recent social media post hinted the South American is on the comeback trail.

And finally, new and exciting signing Amad could be handed his first senior competitive start.

Regular right-sided winger Mason Greenwood has struggled for goal contributions in recent games and the Englishman’s dip in form could prompt Solskjaer to give Amad the game time his talent deserves.