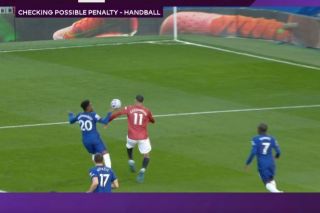 As the dust settles on from Manchester United’s draw at Chelsea, the sense of injustice still continues to linger. Usually, a point at a far from happy hunting ground would be met with satisfaction, and – although it still represents a better result for us than it does for them – there’s a sense that we should have had more.

As always seems to be the case, and certainly not for the first time this season, a referee took centre stage. On Saturday, Lee Mason was the name on everyone’s lips after the official seemed to temporarily forget the laws when allowing Lewis Dunk’s quickly taken free-kick before he disallowed it, allowed it again, and finally ruled it out. Mason whistled twice – quite why remains a mystery – in a decision that could have dire consequences for the Seagulls of Brighton. At Stamford Bridge, this time Stuart Attwell was the man at the centre of the latest controversy. Callum Hudson Odoi’s handball, a blatant penalty all day long, was somehow not given by the official, despite the fact teams have been getting spot-kicks for that type of offence all season. Seemingly just because it was Manchester United, and to the amazement of us all, Attwell went against the narrative we have seen throughout the campaign.

We can’t ever know if what the referee (allegedly) said is true – he apparently told Harry Maguire that it should have been awarded but he didn’t do so because of the controversy and backlash it would cause. But, if he did indeed utter those words, then this man is an absolute disgrace. If it is true (and why would two players and a manager all lie about it) then Attwell should be banned and put up before the FA as its corruption and borderline match fixing.

What Ole said afterwards is right – referees are scared of Manchester United. They don’t want to give us anything even remotely contentious because of the perceived publicity such a decision would create. So instead we’re getting absolutely nothing. As well as Hudson Odoi’s handball, there was the video surfacing on social media showing Mason Mount’s kick out at Fred. Perhaps the ref didn’t see it but surely retrospective action should be taken? But we all know it won’t be because Mount is a media darling and plays for Chelsea. Just imagine how different things would be if the boot was on the other foot (no pun intended). If it was just an isolated incident, then you could overlook it but this ref justice has gone on all season. Right from the opening day when Victor Lindelof got penalised for a handball almost identical to Hudson Odoi’s. Anthony Martial was (wrongly) sent off vs Spurs, Fred got clattered by Ruben Loftus – Cheek in the box at Fulham and Harry Maguire’s header was ruled out for no reason at Turf Moor.

But there’s more. Both Sheffield United’s opener and Martial’s equaliser-that-wasn’t – ruled out after minimal contact on the Blades keeper, were given against us and the Premier League later had to admit they were wrong. Lindelof was flattened by M’baye Diagne for West Brom’s opener at the Hawthorns. Elbowing players out the way is now perfectly legal apparently. I could go on but we’d be here all night. The hardest possible cup draws every time and nothing going in our favour – it really does seem like Jurgen Klopp got his wish taken to extremes when he exploded under the pressure of United’s unexpected title charge. He’s certainly not alone as Frank Lampard and Sean Dyche have also both questioned the leniency towards the Reds.

It seems as if these decisions don’t matter and aren’t important when they go against us – a case of karma and perceived justice given the myth that Sir Alex used to psyche out referees. A case of “its Manchester United and they’ve always had everything in their favour so it’s about time” but that doesn’t make it right does it? Instead of slapping players with a ban for speaking the truth, why don’t the FA carry out due diligence and investigate the referee? These refs carry on every week without sanction yet the players get punished for out on a standard of refereeing that’s Sunday League level at best. Refs are costing teams points and games on a weekly basis yet are never held accountable.

This has to stop as its destroying the game, bringing it into disrepute and fans are questioning our enjoyment of the sport we all love. No one is sure any more regarding what’s offside and what isn’t, or what’s handball and what isn’t. It’s simply the words of one against the subjective input of another, a situation that does nobody any favours at all…maybe I’ll stick to rugby.

Speaking of which, that brings me on nicely to another major bugbear. Why aren’t these referees made to come out and explain their decisions? Of course, it wouldn’t stop them from dropping a clanger and you’d probably still disagree. But if we could at least hear how and why a certain decision has been made then refs would be made accountable and we could hear the logic and reasoning in the same way you would from a player or manager. It would give refs some interaction with the public as they are too protected, everything’s very secretive and its almost like they aren’t there at all. Either that, or you could mic them up like they do in the egg chasing – you can hear what the referees are saying and the fans get to listen in on his communication with the TMO, as they talk through the decision making process. It’s a successful model and has been used for years so why can’t football do the same? If there were plans to implement such a scheme, then the incidents in the west Midlands and in London will surely speed it up.

On another VAR-dominated afternoon, it has become even clearer that, whilst the Premier League may be the self proclaimed “greatest league in the world” its army of inept referees are anything but.