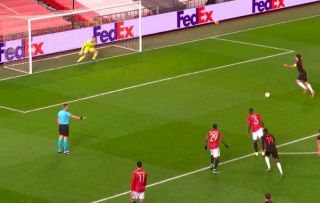 La Real are 4-0 down in the Europa League round-of-32 tie but have made a bright start at Old Trafford and were given the perfect chance to take the lead inside the first fifteen minutes.

Daniel James was adjudged to have fouled Andoni Gorosabel on the edge of the box and the referee had no hesitation in awarding a spot-kick.

But United were reprieved as Oyarzabal took Fernandes’ traditional hop, skip and a jump before missing the target.

United goalkeeper Dean Henderson was routed to his spot but Spanish international Oyarzabal was left embarrassed after a poor effort.