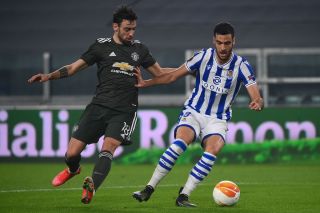 Manchester United return to Old Trafford to play host against Real Sociedad in the second leg of the teams’ Europa League encounter, following last week’s 4-0 away win in Turin.

Since 2012, United are unbeaten at Old Trafford in their last 14 Europa League matches. Real Sociedad go into tonight’s game coming off a 4-0 dismantling of their own versus Deportivo Alaves.

It would mark a truly incredible comeback if they managed it but there’s nobody who will be seriously predicting that tonight.

©️ @B_Fernandes8 will lead out the Reds this evening! ✊

Dean Henderson starts between the sticks.

Aaron Wan-Bissaka and Alex Telles will operate the full-back roles while Eric Bailly and Victor Lindelof partner each other in the heart of defence.

Fred, Nemanja Matic and Bruno Fernandes start in midfield. Most Reds probably thought the Portugal international would get a rest tonight but Solskjaer has decided against that by starting with him as captain.

That leaves us with Daniel James, Mason Greenwood and Anthony Martial up top.

Our biggest is warning is to not be fooled by the first leg. La Real are a decent side and they will be trying to set the record straight. It should be an impossible ask but that comes down to us and how we approach the game.

Not long ago we threw away a really strong position at the top of the Champions League group. We ended up third, crashing out of the competition and into the Europa League, so even with four away goals we need to see out the tie.