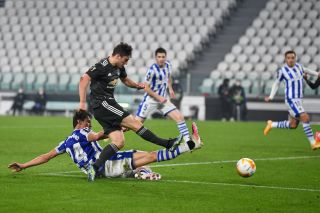 Daniel James is the surprise name in the Manchester United starting lineup to face Newcastle at Old Trafford this evening.

Ole Gunnar Solskjaer has made five changes to his side that dismantled Real Sociedad in the Europa League first-leg tie in midweek and James has retained his place in attack.

The Wales international scored the fourth goal in United’s emphatic 4-0 win in Turin and makes his first Premier League start of 2021 against Steve Bruce’s Magpies.

Solskjaer was delighted with James’ impact in midweek and believes he deserved another opportunity this evening.

“I thought his performance [against Sociedad] was excellent, he gave us energy in the pressing, gives us runs in behind and keeps the width for us.” Solskjaer told MUTV, as quoted by the MEN.

“We felt he deserved another start.”

James makes his sixth league start of the season in an attacking trident including Anthony Martial and Marcus Rashford.

Scott McTominay injured his ankle against La Real so Nemanja Matic pairs up with Fred in the midfield pivot.

READ MORE: Why Edinson Cavani is not in Man Utd squad vs Newcastle and when he could return