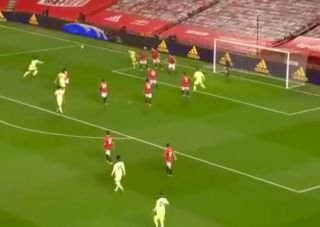 Allan Saint-Maximin has fired Newcastle level and its the least that Steve Bruce’s side deserve in the Premier League fixture at Old Trafford.

United have been tepid in the opening half hour but took the lead after Marcus Rashford took initiative and fired in a wonderful solo goal, beating Karl Darlow at the near post.

But just six minutes after the Reds had taken the lead, the Magpies levelled terms through Maximin’s superb finish.

United’s failure to clear crosses has become a worrying theme in their defensive play and Harry Maguire couldn’t generate enough on his header and the ball fell to Saint-Maximin.

The French winger side footed powerfully past David de Gea who could do little to stop the equaliser.

How about that for a finish from Allan Saint-Maximin?!

Man Utd fail to clear their lines and Newcastle's number 10 is there to take advantage 🎯 pic.twitter.com/7iDDBuQRlw