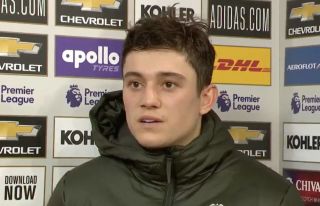 After bagging a goal during his side’s 4-0 thrashing over Real Sociedad in the Europa League, James was rewarded with another start during Sunday’s Premier League match against Newcastle United.

In an attempt to repay his manager, the pacey Welsh winger netted for a second time this week.

After watching Allan Saint-Maximin equaliser, a brilliant finish in the second-half saw James smash the ball past keeper Karl Darlow to give the Red Devils the lead.

Speaking after the game, the young attacker revealed that his sudden resurgence in form is down to some in-depth analysis.

“I have been working on the training ground as hard as I can,” James said. “I think I kind of lost my way a bit. I wasn’t playing the same as I did at the start of last season so that’s why I had to look at analysis and stuff like that.”

“I looked at a lot of analysis and have been working on the training ground to get back to myself.”

He spoke to @TheDesKelly after a 3-1 win over Newcastle. pic.twitter.com/ajlGzN7AfP