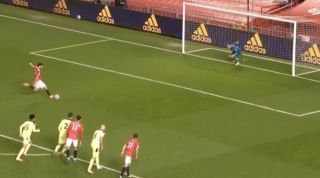 Manchester United’s midfield sensation Bruno Fernandes has once again found himself on the Red Devils’ scoresheet.

Whilst in action during Sunday’s evening Premier League kick-off against Newcastle United at Old Trafford, the Portuguese superstar has added another goal to his growing collection.

After bagging another assist for winger Daniel James earlier in the game, Fernandes was later tasked with converting a spot-kick.

Attacker Marcus Rashford went down under a poorly timed challenge from Joe Willock, Fernandes being handed the ball and expected to gift his side a two-goal lead.

The spot-kick was never in doubt with Fernandes netting in his usual cool style.

The Portuguese midfielder now has 35 goal involvements in 37 appearances, in all competitions, so far this season.