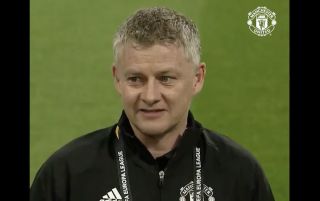 Manchester United manager Ole Gunnar Solskjaer has hinted that he has instructed his Red Devils to go out and attack Real Sociedad in Thursday’s Europa League knockout tie.

United come into Thursday’s match in patchy form and will desperate to get back to winning ways following a bitterly disappointing domestic 1-1 draw against West Brom last weekend.

With the possibility of taking a crucial away lead into the return leg, it’s vitally important the Red Devils do not pick up another disappointing result.

United have been criticised in recent weeks for struggling to start games quickly, something which Solskjaer clearly wants to address against Real Sociedad.

Speaking ahead of the game, the Norwegian said: “It’s worth going for goals. I know it’s a neutral venue but for us we have to take the advantage of whenever there’s a chance we need to go forward. Attack quickly!”

🗣️ Time to check in with the boss!

Sound 🔛 to hear from Ole on tonight’s #UEL match!#MUFC pic.twitter.com/LrPC4L2Gf8