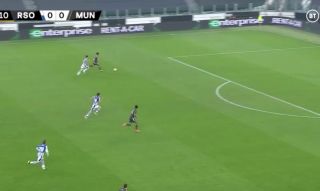 How on earth did he miss?

I don’t care how good you think the goalkeeper does to make himself big, Marcus Rashford should be hitting the back of the net.

The United forward leads the line tonight and has had two chances in the game to squad, only to squander both, but he must keep his chin up and bag the next one.

We can expect more chances to come because it’s been a very open game. Real Sociedad have had chances too.

Rashford is played in on goal but looks too casual as he strikes the ball when he should be smashing it with his laces.

It’s the sort of chance you want falling at Edinson Cavani’s feet had he been on the pitch at the time.

Other than two bad misses, Rashford has been making fantastic runs into dangerous areas. He just needs to find the back of the net.