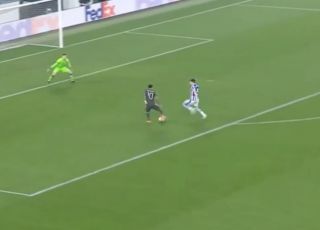 Marcus Rashford has been getting into good positions since the start of the game, but he finally sticks the ball into the back of the net.

Rashford is leading the line tonight and he did that brilliantly for United’s third after being played through by a fantastic pass from Fred.

This is the competition Rashford used to break into the first-team and he took his goal very well to send the ball around the goalkeeper.

Hopefully this will see him kick on for the rest of the season because more goals are needed if United are to win football matches and finish second in the Premier League. Obviously, in the Europa League we just want to progress and that looks set in stone after scoring our third away goal of the night.

Fred with a magical ball through for Marcus Rashford who makes the finish look easy!#UEL pic.twitter.com/cFHu8jfFUq

One foot in the next round!

One response to “Video: Fred plays perfect through ball to Rashford as United score third away goal v Real Sociedad”