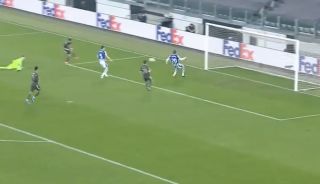 There are three things certain in life; death, taxes and Bruno Fernandes being among Man United’s goals.

The Red Devils who have travelled to Turin to face Real Sociedad in the first-round of this season’s Europa League have been gifted the lead through their star-midfielder.

Fernandes, who boasts a simply superb goalscoring tally has notched another.

In what has been a very open first 30-minutes, which has seen both sides have good chances, it has been Ole Gunnar Solskjaer’s men who have drawn the first blood.

All credit must, once again, go to Fernandes though – The Portuguese playmaker found himself in the right place, at the right time before cooly converting.

Still all to play for though.

Bruno Fernandes bags his 20th goal of the season 🔥

A lovely ball over the top from Marcus Rashford caused all sorts of problems at the back for Sociedad… pic.twitter.com/JdwvoOhJUA