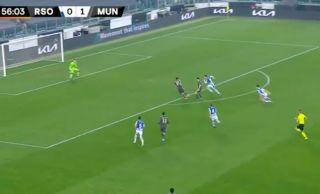 Manchester United’s totemic playmaker scored his 20th goal of the season to give the Reds the lead against Real Sociedad in Turn and now has his 21st in fine style.

Ole Gunnar Solskjaer’s side are in complete control of this Europa League round-of-32 tie and Fernandes has been clinical once again.

Fernandes took control and dug out a superb finish to give Real Sociedad’s goalkeeper no chance.

See the goal below. Footage courtesy of RMC Sport.