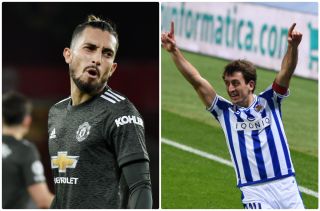 Manchester United take on Real Sociedad in the first leg of the UEFA Europa League round of 32 on Thursday evening. The game will be played in Turin, Italy due to COVID-19 travel restrictions in Spain’s mountainous Basque country.

The Red Devils started the 2020/21 campaign in the Champions League picking up impressive victories over Paris Saint-Germain and RB Leipzig in their opening two fixtures. However, three defeats from the last four group games meant United finished third in Group H and would transfer over to the Europa League’s knockout stages. La Real were defeated just once in their six Europa League group games, winning twice and drawing three times as they secured second place in Group F behind table-toppers Napoli. Sociedad have struggled in front of goal in Europe so far this season scoring a meagre five goals in the Europa League group stages which was the lowest out of the 24 teams who progressed to the knockout stages of the competition.

Manchester United embarked on an impressive unbeaten run in the Premier League following their Champions League exit in December coinciding with the Red Devils briefly topping the Premier League for the first time since 2013. However, they have struggled to assert themselves in recent weeks only winning two of their last six in all competitions dropping valuable points against relegation favourites Sheffield United and West Bromwich Albion. Ole Gunnar Solskjaer’s side are currently second in the Premier League table level on points with Top 4 rivals Leicester City and trailing runaway leaders Manchester City by seven points.

La Real started the season excellently under manager Imanol Alguacil winning four of their first seven league games, becoming surprise leaders of La Liga in November for a brief period of time. However, the Spanish side have struggled since their early season form only winning three of their last 13 games. Consecutive victories over Cadiz and Getafe earlier this month marked the first time since November that La Real recorded back-to-back wins in La Liga. Alguacil’s side are currently fifth in La Liga trailing fourth placed Sevilla by seven points in the battle to qualify for next seasons Champions League.  The arrival of ex-Manchester City maestro David Silva on a free transfer has proven to be an astute signing from Sociedad manager Alguacil, with the 35-year-old impressing since arriving in the Basque country.

It was reported (and translated by Sport Witness) last week La Real’s danger man Mikel Oyarzabal would miss the first leg in Turin through injury, but the Spaniard was a surprise inclusion in the starting team in the 1-0 victory over Getafe at the weekend. Oyarzabal has been at the club for the past decade joining Sociedad’s youth system in 2011 when he was 14-years-old. He has amassed over 218 appearances scoring 60 goals in all competitions since making his first team debut on the 20th September 2015 as an 18-year-old, quickly becoming the latest talent to come through the infamous Zubieta academy that has flourished in La Liga. The Zubieta academy lies in the Basque countryside five miles south of San Sebastian and has developed academy graduates such as Spanish World Cup winner Xabi Alonso, Barcelona star Antoine Griezmann and La Real legend Xabi Prieto.

Oyarzabal is a left winger by trade but his role for Alguacil’s Sociedad is much freer as he uses his wide position to drift from the left to the right flank, looking for space to punish opposing defenders. He occasionally plays centrally at times for La Real as a false nine and there have been suggestions that Spain manager Luis Enrique could potentially play him in that position in the future. Oyarzabal is not blessed with natural pace like most modern wingers but he compensates for his lack of speed with his brilliant technical ability. His vision and passing ability enables him to create chances at will for his side which is apparent as the Spanish international has recorded 40 assists since breaking into the first team in 2015, he is the main creative influence for La Real. He has also shown his ability to score goals from wide recording double figures in his last three seasons as the club; he currently has ten goals and four assists in 18 La Liga appearances so far this season.  Manchester United full back Alex Telles will have a difficult task keeping the influential winger quiet on Thursday evening in Turin with the winner of the duel being crucial to deciding who comes away from Italy with a positive result.

Alex Telles joined Manchester United from FC Porto in deal worth £15.4 million in the summer transfer market (via Sky Sports). The 27-year-old Brazilian joined the Red Devils to provide competition to Luke Shaw for the left back starting position at Old Trafford. Telles is widely regarded as one of most exciting attacking left full backs in Europe renowned for his technical ability that enables him to create chances and score regularly. He has brilliant crossing ability for a full back and often puts in dangerous pinpoint lofty crosses into the opponents box to attack. His delivery from set pieces is another secret weapon which is evident from Telles registering 15 assists from corners in Primeira Liga since arriving at FC Porto in 2016. However, there are a few weaknesses in the Brazilian’s game that can be targeted by opposition players in the Premier League. His lack of pace means he struggles to defend one-on-one situations against wingers and he does not provide enough width as a full back going forward to contribute overall to the attack.

He got his big break in Europe in 2014 when he joined Turkish giants Galatasaray from Brazilian club Gremio making 60 appearances and scoring 2 goals in all competitions during his three years in Istanbul. Telles decided he needed a new challenge and opted to join Inter Milan on a season long loan for the 2015/16 season reuniting with manager Roberto Mancini in Italy, who previously coached him at Galatasaray. Inter boss Mancini rotated Telles with first choice left back Davide Santon throughout the season with the Brazilian making 22 appearances in all competitions. The loan deal included a buy option for £8.5 million which was not activated by Inter Milan after the impressive displays of first choice left back Santon. Telles’ impressive performances in Serie A caught the eye of Portuguese club FC Porto who secured the services of the left back for £6.5 million in the 2016 summer transfer window. The Brazilian left back fitted seamlessly into life in Primeira Liga quickly becoming one of the most exciting full backs in Europe for the Dragoes. According to Transfermarkt, Telles has been directly involved in 81 goals (55 assists and 26 goals) in 195 appearances during his four years at FC Porto, making him one of the most productive fullbacks in European football. FC Porto manager Sergio Conceicao enjoyed a close relationship with the Brazilian full back as they enjoyed a successful period at the club winning two Primeira Liga titles.

Despite a promising debut for the Red Devils in the victory over Paris Saint-Germain in the Champions League, Telles has been used sporadically by Manchester United manager Solskjaer since arriving at the club. He has made 14 appearances in all competitions so far this season for the Red Devils, partly because of the exceptional re-emergence of the Shaw at left back. Solskjaer has hailed Telles’ arrival to the squad and praised how the competition at left back has coincided with Shaw playing the best football of his career. The Brazilian will get the opportunity to fill in at left back against Sociedad in the Europa League round of 32 with Solskjaer expected to rotate his squad. Telles will have the task of keeping Sociedad danger man Oyarzabal quiet in Turin and an impressive performance might coincide with more regular game time for the Red Devils.