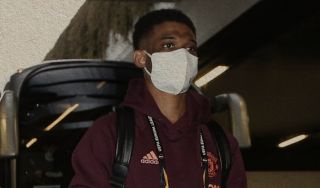 The hype surrounding Manchester United’s new wonderkid is slowly reaching boiling point. Teenager winger Amad Diallo has arrived with the senior squad ahead of Thursday’s Europa League tie against Real Sociedad, and pockets of fans have reacted to the possibility of seeing his long-awaited debut.

Diallo, 18, joined United last month after he agreed to move from Atalanta last summer, as per ManUtd.com.

After being integrated into life in Manchester by way of the Red Devils’ under-23s, Diallo has hit the ground running.

Three goals and three assists in just two appearances for the club’s youth team have seen the Ivorian attacker force his way into the club’s senior first-team.

Named on Ole Gunnar Solskjaer’s bench for his side’s first-round knockout tie against Spanish side Real Sociedad, fans have taken to their social media to show their excitement for the teenage sensation.

DEBUT TONIGHT WITH A BANG

Need him to bag the winner