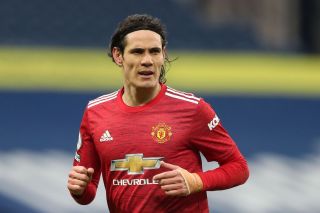 Edinson Cavani is in the final four months of his deal at Manchester United and can talk to other clubs.

There’s no reason to fear being without Cavani next season unless the club decide not to activate the one-year clause in his deal and Daily Telegraph reporter Mike McGrath claims the Uruguayan striker wants to play for United next season.

Edinson Cavani in final 4 months of deal + can talk to other clubs but wants to play at #MUFC next season and focused on 2021/22 rather than move. Club have 1 yr option to activate #ManUtd pic.twitter.com/0KvKEzmTgv

Having one of the best strikers of the past decade in our squad will be bonus next season when with more additions we should be closer to challenging for the Premier League title. Ole Gunnar Solskjaer still needs to find a way to get the most out of all his attacking players at once.

We are pretty close when you look as far as the standings but last night Man City went 10 points clear after a win against Everton. Pep Guardiola’s men are on a convincing run right now and it will take a lot to catch up with them now.

It’s a shame to be talking that way in February but it doesn’t change anything as far as the team is concerned this season. They should be finishing runners-up and by that, I mean finishing the campaign strongly rather than fall into a top four scrap.

With Cavani starting games we can have no excuses.