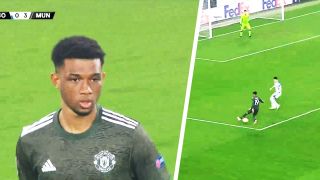 We’ve all been eagerly waiting for Ole Gunnar Solskjaer to hand Amad Diallo his first team debut after watching the youngster impress with Manchester United U23s.

Amad Diallo joined Manchester United from Atalanta at the beginning of January after agreeing a deal with the club in the summer. Until tonight, the young Ivorian only got minutes under his belt with the youths.

Tonight he made a positive impact despite only having 12 minutes off the bench, still managing to complete more dribbles than any other forward on the pitch, and Ole Gunnar Solskjaer is bound to be impressed by the youngster’s short cameo.

The stat, provided by Statman Dave on Twitter, records 3/3 dribbles from Amad showing a 100% success rate. It’s been a while since we’ve had a winger on the right who can comfortable beat his man with pace and it’s a welcome addition to the side.

It’s important to take caution with such a young player because he doesn’t need anymore pressure on his shoulders after making a big money switch from Atalanta.

We could see Amad next in the FA Cup against Leicester. He could even make the bench between now and then.