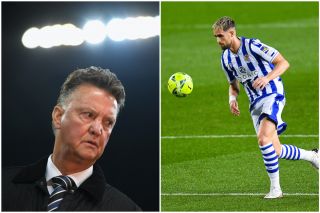 Those are big claims to make about a manager who Barcelona legend Andres Iniesta names as his ‘most important manager’, as per talkSPORT, not to mention how he was responsible for giving the following players their debuts at the La Liga club: Xavi, Carles Puyol, and Victor Valdes.

Van Gaal says he has ‘absolutely no need’ to defend himself against recent comments made by Januzaj regarding his time at Old Trafford.

Januzaj is set to face United this week in the Europa League last 32 and he’s been reflecting on his time spent at the club in the lead up to the match.

Speaking to the Manchester Evening News, the 26-year-old claimed he could still be playing for United had his development been overseen by the right coaches when Van Gaal replaced David Moyes.

“At the end of the day, I didn’t have the right people that were working with me, so it was more difficult for me to play,” Januzaj said. “I didn’t want to leave United but when you don’t get game-time, you’re not happy because of a few people, then you cannot stay there and you have to move on and play your football somewhere else.

“It was the staff – his [Van Gaal’s] staff because I had to do whatever he was saying. I was a young boy, I just had to stay calm and, like we say, I just had to shut up and work on the pitch! That’s it. That’s the most you could do, there’s nothing else you could do. You just had to accept it and enjoy and play for your football.”

Januzaj made 28 appearances under Van Gaal before being loaned to Borussia Dortmund where it didn’t work out for the Belgium international.

Now Van Gaal has hit back at Januzaj’s claims that he was to blame by suggesting the lack of game time was down to the player and no-one else.

“I have absolutely no need to defend myself against so much injustice!” Van Gaal is quoted in an email response to The Athletic. “The self-image of players leaves the wishes!

“And my career as a coach/manager shows just how many young players could take their chances under my leadership!

“With a kind box,