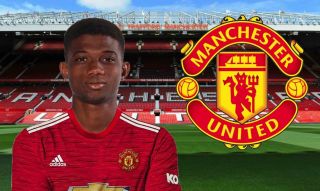 Diallo, 18, completed his move to United last month following an agreement to make the switch from Atalanta last summer, as per ManUtd.

Since his arrival in England, the highly-rated youngster has been introduced to life at United slowly by way of the club’s under-23s side.

After featuring in two matches for the club’s under-23s, Diallo has hit the ground running.

It goes without saying, the talented teenager is exciting fans all around the world with many eagerly waiting on his senior debut.

Despite being named among the substitutes for his side’s FA Cup Fifth Round tie against West Ham last week, Diallo failed to make an appearance.

In light of Diallo being named among the Red Devils’ confirmed travelling squad to face Real Sociedad, Solskjaer has hinted that Thursday night’s match could finally be the game fans get to see the teenager in action.

Speaking in a scheduled press conference, when asked about Diallo, as quoted by MEN, the Norwegian said: “Well we give them a chance to come to United and have a successful career. That is something we take serious and are good at.

“We like to give players a chance. Our fans, our history has always been about skilful attacking players.”