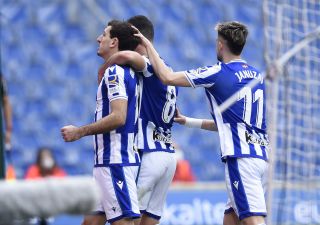 Manchester United will be looking at getting back to winning ways when they face Real Sociedad in the first leg of the round of 32 in the Europa League, on Thursday night at the Allianz Stadium.

The Reds go into the game on the back of a disappointing 1-1 draw with West Brom in the Premier League, while the hosts ran out 1-0 winners over Getafe in La Liga.

Paul Pogba is widely expected to miss the clash against the Real Sociedad with the Frenchman still struggling with a thigh injury whilst Mason Greenwood is expected to be given the nod over Anthony Martial up top.

The Europa League may not be on top of everyone’s wish list this season but it still presents head coach Ole Gunnar Solskjaer a fantastic opportunity of bringing some silverware back to Old Trafford. Winning the Europa League would also guarantee the Reds a place in the Champions League next season and with the race for a top four spot looking likely to go down to the wire, it’s essential United take this competition seriously.

Real Sociedad have enjoyed an impressive season thus far and currently sit fifth in the La Liga table and the Reds will have to be at their very best should they wish to leave with a result. The hosts main threat is arguably former United old boy Adnan Januzaj and if United can keep him quiet it would go a long way to stopping Real Sociedad.

An away goal can go a long way to deciding the outcome in these types of games which is why its essential United grab one. The Reds away form has been particularly impressive this season and if United can put in a repeat performance that we seen against Paris Saint Germain earlier in the season then the Reds should leave the Allianz Stadium with a result.

The last few weeks or so haven’t been great for the Manchester United faithful. Hopes of a 21st league title may have faded but Solskjaer can still make this season a successful one for the club and with games coming thick and fast over the coming weeks its essential United get back to winning ways starting with Real Sociedad on Thursday night.