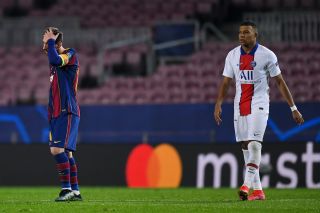 Remember when the Brazilian Ronaldo got a standing ovation after scoring a hat-trick when Real Madrid came to Old Trafford in 2003? Yeah, well this was another one of those amazing performances from Kylian Mbappe.

Mbappe’s performance against Barcelona will be talked about for years as PSG won 4-1 at Camp Nou.

At the age of 22, Mbappe has already won the World Cup with France and last night he signaled his capabilities of being the heir to Lionel Messi’s throne.

The Ligue 1 side really shouldn’t be missing out of the quarter-finals because this is not the same as the Barcelona teams of old.

“It is clear that he is a great footballer, today [Tuesday] he has shown it with his hat-trick,” said PSG manager Mauricio Pochettino. “The great players are creating a path and these three goals put him in the media spotlight.

“We had no doubts and we are happy for him, it’s normal, there are going to be rumours [about him leaving]. What is clear is that he is happy in Paris and we all want to find the best way.”

Manchester United striker Marcus Rashford reached out to applaud Mbappe after his terrific performance against the Spanish giants.

Messi opened the scoring on the night, but he was left watching as PSG destroyed Barcelona on the night.

Mbappe danced past fellow Frenchman Clement Lenglet to score the equaliser, finished from 10-yards for the second and curled his third. With that, the France international became the first player in Champions League history to score a hat-trick against Barcelona in the knockout stages.

A hattrick from @KMbappe. We may be witnessing the changing of the guard.

Mbappe was a constant threat for Barcelona and they knew he’d hurt them if given a chance.