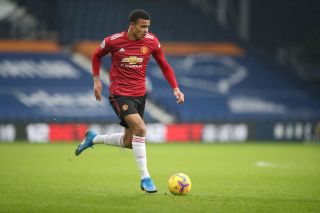 Mason Greenwood joined Ole Gunnar Solskjaer at the pre-Real Sociedad press conference in Manchester before the squad jets off to Turin.

The journalists asked Greenwood a series of questions before speaking to the manager.

Greenwood put pen to paper and signed a new long-term contract at the club this week.

The young striker was asked about his efforts getting back to form.

“I feel I am getting closer to my levels last season,” Greenwood said, as per MEN. “Hopefully I can get back to the standards of last season.”

We are still none the wiser as to where Greenwood will play throughout his career, but right now it’s about getting used to different roles and developing into the best player he can be.

It’s a marvellous task for Solskjaer – getting to work with such a quality centre-forward, like he did at Molde with Erling Haaland, now playing for Borussia Dortmund.

When asked about his preferred position, Greenwood replied rather shyly, saying: “I don’t mind, I can play anywhere across the front three. For me it is just about adapting. I don’t really mind, I will take it as it comes.”

Greenwood is hungry for game time and we are expecting him to start tomorrow night against La Real.

On the back of his breakthrough season it would be fair to say expectations on Greenwood are higher. He was also asked about dealing with that pressure.

“It is something – it’s a challenge. First season not many know you, second season they catch up on you. You need tricks up your sleeve.”

I hope Greenwood becomes a number 9 because he’s already lethal in and around the box. This season he should be looking to learn from Edinson Cavani, and Solskjaer too.

“They both were and are amazing players,” he added. “I have been learning a lot off Edinson, Solskjaer being my coach it is a positive to have them both there.”