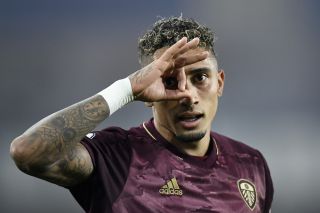 Manchester United have seen their name thrown into more transfer rumours – This time, the Red Devils have been heavily linked with a summer move for Leeds United’s winger Raphinha.

Raphinha, 24, joined Leeds United less than 12-months ago after making the switch from Ligue 1 side Rennes.

After enjoying a hugely impressive breakthrough in England’s top-flight working under the guidance of the highly-rated Marcelo Bielsa, Raphinha has seen his stock rise dramatically.

An impressive patch of form has seen the Brazilian winger nail down a place on the Whites’ right-flank and after contributing to nine goals in just 18 Premier League appearances, Raphinha’s impact cannot be underestimated.

In light of the 24-year-old’s continued and impressive form, a host of top clubs have been linked with a summer move.

The latest outlet to claim both Liverpool and United are actively interested in acquiring the Brazilian’s services is Sky Italia.

However, contrary to these popular reports, Stretty News understands that Ole Gunnar Solskjaer has absolutely no interest in pursuing a move for Raphinha.

A close source has confirmed that the reports linking the Red Devils with Raphinha are no where near reality, with speculation nothing more than media hype.

Well, that’s that then.