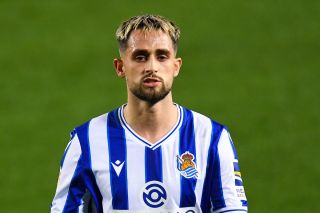 Manchester United face Real Sociedad in the Europa League on Thursday in a tie that brings us face-to-face with former prodigy Adnan Januzaj. Remember him?

Yes, we know, I try not to either, but bear with us here. With United in the throes of the David Moyes ‘error’, and desperate for someone – anyone – to re-float a rapidly sinking season, the ill-fated Scottish boss trod a familiar path and turned to youth.

Few of us had heard the name Adnan Januzaj, a young Belgian plying his trade in the Reds Academy ranks, but all that changed in October 2013. Handed his first Premier League start, Januzaj smashed through the ceiling and catapulted himself into the national spotlight with two goals at Sunderland and a star was born, a fresh faced beacon of hope for the future who embodied the United spirit and promised to deliver the club back to former glory….or so we thought..

With the curtain finally coming down on the epic final act of Ryan Giggs long, illustrious and decorated career, here, fresh from the Carrington conveyor belt, was the legendary Welshman’s kindred spirit, his heir apparent on the left wing. Desperate to adorn a homegrown youngster worthy of the name for the first time in what felt like an eternity, the 18-year-old wunderkid quickly became the new apple of every Reds eye. As his new terrace chant regaled “A boy who can do anything.” In Januzaj, United had found a new pin up boy and a shining light in the darkest of seasons.

Having let Paul Pogba go for nothing, United were determined to keep hold of their latest prodigy, a burgeoning talent who would soon surely attract the admiring glances of Europe’s heavyweights. If Januzaj was this good in a side this poor, we could only imagine how great he could be for a better side. He gave a freshness to the Reds, he took players on, beat them, added pace, unpredictability and vigour to an attack that, in all honesty, had been missing everything he offered for years. In the way that only a footballer can, he became the Messiah, an overnight sensation,  and the answer to all of our problems. United offered him a mega pay rise and a bumper new deal.

Yet there were cautionary – almost prophetic – words from then Swansea boss Michael Laudrup after Januzaj’s sparkling showing against his Swans side. Believing your own hype and thinking you’ve made it – when in fact your journey has only just begun – is common in young players. You have to develop, and want to do so, to truly it make it in the dog-eat-dog, cut throat world of professional football. Laudrup said that, all too often, players get told they’re so great after only a few games and begin to believe it, losing focus and not doing enough when it comes to proving how good they really are. It is often this innate sense of “wanting it” that sets out the great from merely the good. “I hope he’s the kind of player who knows he will have to develop and move on, not think that just because you’ve played 10 games in the Premier League then you’re already at the top,” Laudrup would later say, as per the Mail.

Januzaj’s debut season in the first team yielded four goals and six assists across 35 appearances, an impressive return for someone so young. It appeared only the start of a golden future, but instead proved to be merely the zenith of his Old Trafford career.

The arrival of Louis van Gaal derailed Januzaj’s rapid rise to prominence. The Dutchman was certainly not a friend of the flair player, instead preferring a rigid tactical framework in which individual brilliance and flamboyance were conspicuous by absence. Januzaj had displayed an exciting, off the cuff approach under the sacked Moyes – qualities that were never going to be fully appreciated by the staid and outdated Dutchman.

Januzaj fell out of favour and started only eight times in 2014-15 amidst increasing frustration from the player’s agent and his father over a lack of game time. Van Gaal criticised his work rate and attitude, with the player eventually going on loan to Dortmund – Europe’s finest house of exiting young talent – where he drew the ire of Thomas Tuchel, Chelsea’s recently appointed new boss but then in charge of the German giants.

At Dortmund, his star didn’t just stop shining, but it was extinguished completely and he was sent back to Old Trafford – tail not so much tucked, but wrapped, between legs. Tuchel would later say Januzaj’s heart was “never really in it” and he lacked the “motivation and attitude needed” – a damning indictment and a theme that was rapidly becoming Januzaj’s raison d’être, as per Eurosport.

He would rejoin Moyes at Sunderland but instead of re-igniting his dwindling fire, Januzaj failed to impress again as that early sparkle – the promise of superstardom – ebbed away by the week (I’ve heard Sunderland can do that to many a man, though, to be fair). He registered one goal and no assists in 25 games on Wearside and became synonymous with unfulfilled potential.

Since his departure, new stars have risen to the fore in Manchester – Marcus Rashford, Mason Greenwood, the man in Januzaj’s old number 11, Anthony Martial and of course the most magnificent of all, Bruno Fernandes.

He remains the one whom got away and many will put Januzaj’s failings down to a lack of application, the classic story of a young player with the world at his feet who was given too much too soon and losing his motivation.

But, still only 26 and as his former side prepare to face his current one this week, Januzaj will set out to dispel the doubters and there is still plenty of time for him to do so. After all, in the words of the Old Trafford faithful, he was once a boy who could do anything.