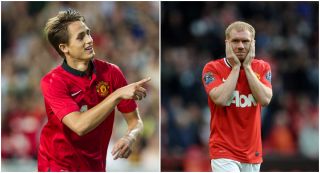 The Real Sociedad clash on Thursday night not only sees Manchester United return to Europe’s second-rate competition, but a former youngster who once lifted bums off seats at Old Trafford will face his old side.

“Yeah, he was a really talented kid,” Scholes told MUTV on Januzaj. “When I retired the first time, I was coaching him with Warren Joyce actually, for six months.

“The talent no doubt was there. It’s still there, he’s doing really well at Sociedad. I think it’s been a good change for him.

“He showed glimpses when he first came into United’s first team, that he had the ability that we all knew he had. For some reason it just didn’t work out and he’s had to go elsewhere.”

I regularly speak to people who watch La Liga much closer than I ever will and it’s good to hear about a former United player finding a new lease of life elsewhere. If only he could be greeted by United’s brilliant away support, or by the Old Trafford faithful for the second leg.

The first leg of United’s Europa League last 32 tie will be held in Turin because of travel restrictions issued by the Spanish government.

Januzaj made his breakthrough at United in the 2013/14 campaign under David Moyes but struggled to rediscover his form after Louis van Gaal was made manager. After loans to Sunderland and Borussia Dortmund it was time to call it a day because Januzaj was failing to reproduce his early promise.

Scholes is pleased to see the move to La Real pay dividends for Januzaj. And so are we.