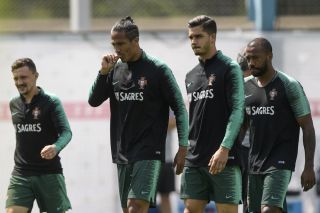 According to reports in Germany, Manchester United have identified Eintracht Frankfurt striker Andre Silva as an ideal alternative to Borussia Dortmund’s Erling Haaland.

Silva, 25, is enjoying a hugely rich vein of form for Frankfurt following his £2.7m move from AC Milan last summer.

The prolific forward joined Frankfurt on a season-long loan two seasons ago before making his switch permanent.

Silva’s impressive form has seen the 25-year-old feature in 20 matches in all competitions during the 2020-21 season and rack-up 21 direct goal contributions.

The Portuguese striker’s continued goal scoring contributions have reportedly seen him emerge as a transfer target for United and Atletico Madrid.

According to recent reports from Sky Sports Germany (via Sports Witness), United are considering Silva as an alternative to Dortmund’s Haaland.

It has been claimed that Atletico Madrid were keen to bring Silva in during the January window, however, after failing to agree a move, the La Liga title contenders turned their attentions to Lyon’s Moussa Dembele.

The latest in the ongoing saga suggests that Diego Simeone remains keen on the 25-year-old but could now face competition from the Red Devils.

Sky Germany claim Silva would be available for just £26m; a fraction of the price Dortmund would demand for Haaland.