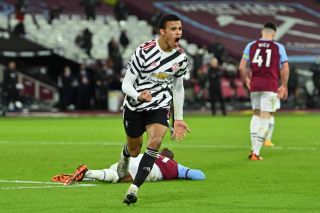 Mason Greenwood has signed a contract extension with Manchester United until 2025, with an option of an extra year.

Last season he became a regular in the first team after coming through the youth academy, and now — like I argued here — many feel he should be playing more often.

His form has dipped a little this season, with him only scoring four goals in 29 appearances, but he did get back on the scoresheet against Liverpool in the FA Cup. Every week we see Anthony Martial fluff chances while Marcus Rashford is wasted out on the right.

Something has to change and I’d like to see Greenwood get more starts under his belt. That’s how he will improve and score more goals. In terms of finishing, he’s better than Martial and Rashford and Ole Gunnar Solskjaer has went on record to say that in the past, as per GOAL.

Overall, Greenwood has 21 goals and ten assists from his 82 first team appearances since 2019. I would call him one of the best young players in the Premier League and his talent needs to be nurtured.

Let’s give the kid more games.

Anyhow, I took a look at Twitter after United confirmed the news that Greenwood had put pen to paper and signed a long-term deal.

The reaction is mixed and perfectly sums up why I hate what Twitter has become.

Greedwood – too busy thinking of personal glory than the team. Passed up 2 clear cut goals by shooting rather than squaring it to a teammate…and I've only seen him play twice! Hopefully that is addressed.

We can’t celebrate contract extensions.
You all owe trophies to us, You should focus on transfer, no ambition to attain success

A few tweeters I see eye-to-eye with when it comes to young Greenwood.

glad to hear that it was a wise decision to keep Greenwood, he is a player who is growing and will be a player to rely on

Ignore the noise & stay focused Mason. Your talent will do the rest 👊🏼