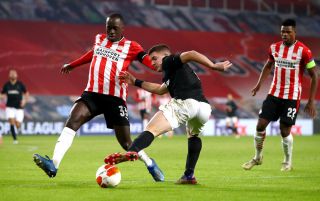 Tzolis, 19, is a highly-rated youngster who is widely regarded as one of the most exciting prospects to come out of Europe.

The teenager has enjoyed a recent and impressive breakthrough which has reportedly prompted the likes of Borussia Dortmund and Ole Gunnar Solskjaer’s United to take note.

According to a recent report from Sportime (via Sports Witness), who claim the 19-year-old has ‘Europe at his feet’, United are keen to continue to add Tzolis to their youth ranks.

It has been reported that the attacking winger, who mostly operates on the left but can also play as a forward, is on the shortlist of several of football’s biggest clubs.

United have been turning heads with their recent youth recruitment which has included the likes of Amad Diallo, who recently made the switch from Serie A side Atalanta, and should these reports be anything to go by, fans may be treated to another talent sooner rather than later.

Although it is being reported that United are only monitoring the teenager at this stage, it is widely accepted that should an offer of at least £17m come in, PAOK Salonika will allow their teenager to depart.