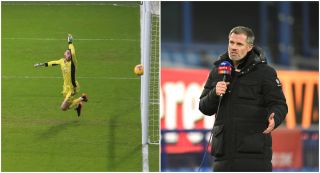 Ole Gunnar Solskjaer needs to drop David de Gea and give Dean Henderson a run in the team, according to Jamie Carragher.

Having spent time on loan at Stockport, Grimsby, Shrewsbury and two seasons at Sheffield United, the 23-year-old goalkeeper has took over from Sergio Romero as second choice keeper to De Gea.

Henderson was handed a new and improved contract upon returning to United in the summer which will keep him at the club until 2025, as per GOAL. He’s not going to want to sit on the bench for much long and with De Gea regularly making mistakes it may be time for a change.

Carragher thinks United will need a new keeper unless Henderson proves he can become number one.

“The next big thing Manchester United need to do is sort the goalkeeper out,” Carragher told Sky Sports, as quoted by Metro. “David de Gea, right now, is not a goalkeeper to win the league. They have a really good understudy in Dean Henderson, but we don’t know if he’s Manchester United material.

“United aren’t going to win the league but I think they’re pretty safe for the top four with the points they’ve got and how good they are.

“If I was Ole Gunnar Solskjaer, I would put Dean Henderson in for 10 or 12 games now because they need to find out if he’s Manchester United’s number one for next season. If he plays and he’s not good enough, they need to buy a new goalkeeper in the summer.”

This doesn’t bode well for De Gea but the Spaniard has not been his best for almost 3 years. The question is how long should Solskjaer persist with an underperforming shot-stopper? Especially when United should be piling pressure on Premier League leaders Man City and securing second place.

I don’t expect Henderson to be more patient than he has been this season. On top of that, his patience won’t last forever and why should they?

Henderson will believe he has a good career in the game whether it’s at United or somewhere else.