Paul Merson believes Manchester United must push for a move for Harry Kane rather than Borussia Dortmund forward Erling Haaland.

Edinson Cavani has made an immediate impact since his arrival last summer, but United will soon need to look towards a long-term striker target after the Uruguayan celebrated his 33rd birthday on Sunday.

Cavani has ousted Anthony Martial as Ole Gunnar Solskjaer’s preferred centre forward and there are concerns the Frenchman won’t truly be able to fulfil his potential in the striker position.

Tottenham and England striker Kane and Norwegian have both been linked with United in the past but Arsenal legend Merson believes the former is a more suitable option for the Reds as he could bring instant success.

“If I’m Man United, I’m doing all I can to buy Kane,” Merson told Sky Sports.

“I know Erling Haaland is on a lot of radars, but there should be only one person on Man United’s radar: Harry Kane.

“If they want to close the gap to Man City, they need someone to come to that club and score goals the minute he walks into that club, like Harry Kane can. 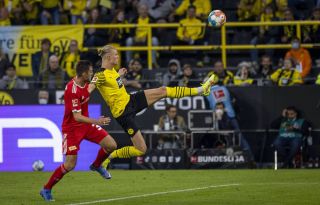 “Because Kane has done it, year in, year out, in this relentless league. Who is to know Haaland is going to hit the ground running in this league? You don’t have time in this league. Timo Werner was scoring goals left, right and centre, but came here and has struggled.

“Sometimes I watch Kane and think: ‘Am I the only one who sees this?’ I’d be paying everything to sign him. He’s got the entire package.

“Man Utd need to win the league now, not in five or six years’ time.

“Don’t get me wrong, Haaland is an unbelievable prospect. But for me it’s a no brainer – I’d want to win the league now!”

Kane has 156 Premier League goals for Spurs and has adapted his game to become the complete forward over the last few years.

Haaland, meanwhile, has continued his magnificent scoring record in the Bundesliga this season and is a 20-year-old generational talent destined for greatness.

United may prefer to extend Cavani’s contract rather than make a marquee striker signing this summer, but it may be the ideal time to capitalise in the transfer market and sign their next number nine.

READ MORE: When Man United’s FA Cup quarter-final against Leicester will take place and where to watch