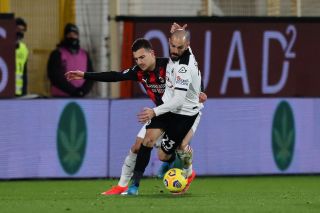 Dalot, 21, joined United from FC Porto in 2018, however, after struggling to force his way into Ole Gunnar Solskjaer’s first-team plans, the Portuguese full-back was allowed to join AC Milan on a season-long loan last summer.

Despite a decent start to life in Italy, Dalot has recently seen his name dragged through the mud in the Italian press.

AC Milan are strong contenders to lift this season’s Serie A title, in what would be their first domestic trophy since 2011.

However, whilst in action on Sunday against bottom-half Spezia, the Rossoneri endured a shocking 2-0 away defeat.

Dalot was named among the side’s starting 11 and managed to feature for the duration of the match.

However, in what a hugely underwhelming performance by the entire team, it has been Dalot who has received the most criticism.

Milan News weighed-in on their side’s defeat and labelled Dalot as ‘disastrous’. The outlet also went on to describe the 21-year-old’s performance as ‘horrible’ and gave him a rating of just four out of 10.

Elsewhere, Sky Italia pundit (as quoted by Pianeta Milan) said: “Riccardo Saponara [Spezia left-winger] dominated Dalot, for me he was the worst of Milan.”

And lastly, Milan Live (as quoted by Sports Witness) said: ‘The Portuguese full-back once again provided a largely negative performance, which was rejected by everyone.

‘It is not the first time that Dalot has not shown himself up to par. Apart from the San Siro match against Europa League opponents Sparta Prague, in which he scored a goal and an assist, his performances have never been really positive.’