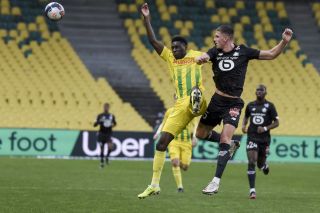 Botman, 21, joined Lille last summer following his departure from Ajax in a deal worth just £7.2m, as per Transfermarkt.

Since the young Dutch defender’s arrival in France’s top-flight, he has featured in 30 matches, in all competitions.

The defender’s impressive performances have seen him be linked with a move to Premier League champions Liverpool, as per journalist Fabrizio Romano.

Liverpool have *not* opened official talks with Lille to sign Sven Botman atm.

The Dutch centre back has been scouted and he’s considered a true talent – but there’s nothing advanced at the moment. Let’s see #LFC final decision about the CB in the next weeks 🔴 #Liverpool

Despite agreeing to sign Schalke centre-back Ozan Kabak at the end of the winter window, Liverpool’s links to Botman have not disappeared.

Shockingly though, another team to be recently linked with the 21-year-old is Ole Gunnar Solskjaer’s Red Devils.

According to a recent report from Eurosport, United’s hierarchy are set to battle it out with Liverpool for the Lille defender’s signature.

It is not yet known when either club may be targeting the Dutchman, however, a summer move has been speculated.