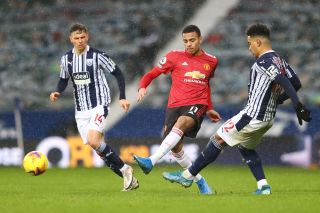 Manchester United have reportedly placed Mason Greenwood on an individual training regime with a view to see the teenager improve his near-post goalscoring.

Greenwood, 19, is a product of United’s illustrious youth academy and after climbing his way through the ranks, has now found himself as a first-team regular.

Despite playing as a central striker for the club’s under-18s and under-23s, Greenwood has found his senior career requiring a more wide-right role.

After being asked to fill-in for the side’s depleted right-sided attacking options, Greenwood’s efforts on the flank have been fairly impressive.

Since making his senior debut in 2019, Greenwood has gone on to feature in 82 matches in all competitions and has racked up 31 direct goal contributions.

Although fans are thankful for Greenwood’s development, according to a recent report from The Athletic, the Red Devils’ coaching staff are eager for him to push on even further.

It has been claimed that in an attempt to see the teenager become even more clinical in front of goal, coaching staff have placed him on a individual regime.

The Athletic believe United’s first-team coaches are working hard with Greenwood on the training pitch with the youngster putting in particular efforts to score at the near post.