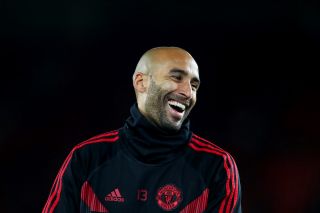 Manchester United’s emergency back-up goalkeeper Lee Grant is reportedly set to be offered a new contract which would also see the experienced shot-stopper take on a coaching role.

Since arriving, Grant has made just two first-team appearances, something he would have been expecting considering the likes of David De Gea and Dean Henderson are both first-choices.

However, despite rarely featuring in competitive action, according to a recent report from the Daily Star, the Red Devils’ hierarchy are preparing to offer the 38-year-old a new contract.

It has been claimed that Grant’s new contract will be tailored to a player-coach role.

Whilst currently taking his coaching badges, Grant is expected to be added to the club’s coaching staff, obviously with a view to improve their goalkeeping department.

United’s efforts to bulk up their goalkeeping levels come at a time which has seen them try and sign one of Europe’s most highly-rated keepers, Celtic’s Vincent Angelini.

We recently revealed that United’s recruitment staff have been continually trying to strike a deal for the talented 17-year-old who they view as the ideal youth keeper.

Should Grant be kept on as a goalkeeping coach? – Let us know in the comments.