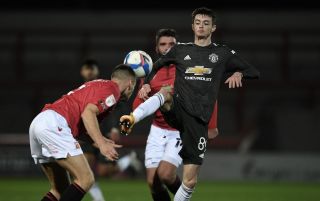 Manchester United under-23 starlet Joe Hugill has broken his silence on his side’s recent 6-3 thrashing over rivals Liverpool.

Hugill, 17, joined United’s academy last summer after departing Sunderland’s youth ranks in a deal which cost the Red Devils just £297,000, as per Transfermarkt.

In a brilliant patch of form which has seen the youngster net 10 times in 16 matches, surely Hugill will fancy his chances of being next in line for a senior call-up, following Hannibal Mejbri and Shola Shoretire.

One game which contributed massively to Hugill’s impressive goalscoring tally was the side’s recent away trip to rivals Liverpool.

Speaking in a recent interview with Secret Scout, the 17-year-old has revealed why he let Diallo take the team’s second penalty of the match.

“It was the first time I had met Amad,” Hugill said. “He really wanted the first pen, and I was like ‘Nah, I’m going to have it!’

“When you’re talking, you’re like ‘I need to score now.’ You don’t want a massive argument as well because the other team will see that. I was on a hattrick, so I had to take the first pen, and for the next one, as it was my first time meeting him, I wanted him to feel welcome!”

Diallo, 18, joined United last month after making his long-awaited switch from Serie A side Atalanta, as per ManUtd.

Speaking about his first impressions of the young winger during a game which was his debut, Hugill said: “On the ball, his dribbling, everything.

“Even off the ball, for his first goal against Liverpool, he just pressed him! – He’s 18 as well!”