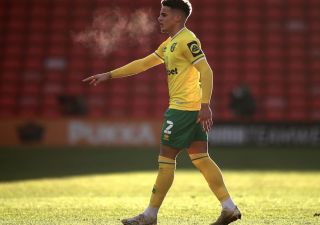 Aarons, 21, joined Norwich City as a young boy after signing up to their youth academy all the way back in 2016.

Five years with the Canaries have seen the young English defender develop into one of Europe’s most highly-rated youngsters.

After featuring heavily during Norwich’s Premier League spell last season, Aarons was a rare beacon of light in what was a largely disappointing campaign for Daniel Farke’s side.

In light of the 21-year-old’s impressive form, he has reportedly emerged as a target for the likes of United who are looking to bolster their right-back options.

However, according to a recent report from the Daily Mail, another club seriously interested in the full-back is Bayern Munich.

It has been claimed that despite Norwich City sitting in the Championship, Aarons is still attracting the interest of some of football’s biggest clubs.

There are even suggestions that Barcelona tried to sign the 21-year-old last month before Norwich insisted the defender will not be leaving until the summer.

Would you like to Aarons at United? – Let us know in the comments.