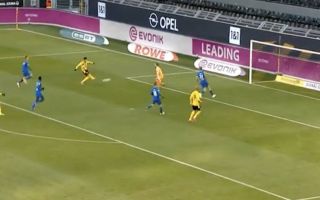 Jadon Sancho is in-form at the moment, but he will be disappointed after Borussia Dortmund drew with Hoffenheim during the weekend.

The England winger had a slow start to the campaign, which came after a summer of speculation.

A deal never materialised between Manchester United and Borussia Dortmund, but Sky Sports ran a report while the Bundesliga club stood firm over Sancho’s valuation.

I wouldn’t go as far as to say Sancho was forced to stay at Dortmund this season, although I think he would have been edging to return to the Premier League and join United.

The 20-year-old has scored six goals in the last ten games, but it wasn’t enough to give Dortmund three points on Saturday during their 2-2 draw at home to Hoffenheim.

A lovely counter-attack from Dortmund 👏