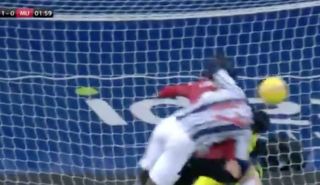 What on earth was Victor Lindelof doing?

Gary Neville has said it time and time again on Sky Sports that Manchester United’s defence needs to push further up the pitch. We expected pressure from West Brom and just 90 seconds into the game they sent a high cross into the box, which we ultimately failed to deal with.

The Baggies opened the scoring through Mbaye Diagne who headed the ball past David de Gea.

My biggest problem with this goal is how easy Diagne found it to beat Lindelof in the air. The Swede needs to be more aggressive.

West Brom are off to a flying start! 🛫

Diagne puts the Baggies ahead within the first 90 seconds. In the words of @gnev2 he 'mauls' Lindelof!

Of course, it’s not unusual for United to fall behind but still manage a win, but something needs to be done about our defenders not being able to do the basics.

Lindelof proving to be a liability again.

2 responses to “Video: Pathetic defending from Lindelof as West Brom score 90 seconds in”