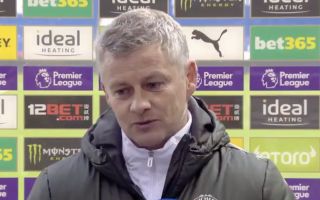 Manchester United manager Ole Gunnar Solskjaer has been speaking after his side’s disappointing 1-1 draw against West Brom on Sunday afternoon.

Despite coming into the match at The Hawthorns in decent form after being unbeaten in their last four matches, United struggled to break down the Baggies all afternoon.

An early opener ensured the Red Devils spent the majority of the match playing catch-up.

Despite a brilliant equaliser from Bruno Fernandes, Solskjaer’s men were unable to claim all three-points.

Speaking after the match, the Norwegian has slammed his side’s lack of ruthlessness and has admitted more goals should have been scored.

🗣”We gave ourselves a tough start”

Manchester United boss Ole Gunnar Solskjaer thinks his side had a lot to do after going 1-0 down against West Brom pic.twitter.com/4DcLJ6RaoT