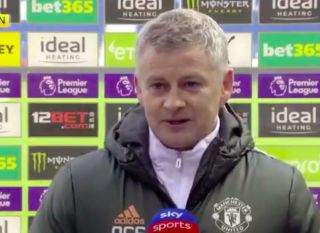 United were frustrated in a 1-1 draw at the Hawthorns and fell behind inside the first two minutes when Mbaye Diagne mauled Victor Lindelof before heading past David de Gea.

Diagne and Lindelof were involved in a physical tussle that the Swedish international was ultimately well beaten in but some suggested there might have been foul play from the Baggies striker.

Solskjaer said post-match that, as a striker himself, there was no wrongdoing as United failed to negotiate an opening they had planned for before kick-off.

But the United boss also pointed to Harry Maguire’s ruled out goal against Burnley at Turf Moor where he made less contact with the opposition defender but was penalised.

Solskjaer has called for more clarity in decision making but he certainly has no excuses about the manner of dropping two more points this afternoon.

Listen to Solskjaer’s thoughts below. Footage courtesy of Sky Sports.

🗣"As an ex striker I would say that is a goal, but where is the consistency?"

Manchester United boss Ole Gunnar Solskjaer did not think West Brom's opening goal was a foul, but wants more consistency after having a similar one ruled out recently pic.twitter.com/qg8bwivvB6

READ MORE: Luke Shaw’s impressive stats as he gets another Manchester United assist vs West Brom