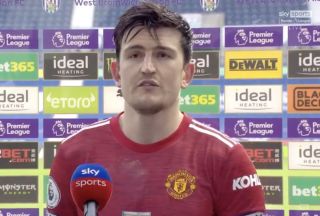 Manchester United have lost ground in the title race after a 1-1 draw away to West Brom has seen the Red Devils drop more points.

Although still outsiders to beat rivals Manchester City to the Premier League title, Ole Gunnar Solskjaer would still have been hoping to claim all-three points during Sunday’s match.

An early opener from the Baggies set the tone for the match and despite a first-half equaliser from Bruno Fernandes, the second-half provided no winner.

The game’s most contentious moment came when captain Harry Maguire went down inside West Brom’s area in what looked to be a foul.

Referee Craig Pawson instantly blew for a spot-kick but after consulting the pitch-side monitor eventually overturned his original decision.

Speaking after his side’s lacklustre 1-1 draw, Maguire has admitted he was left baffled by Pawson’s decision to rule against a penalty.

“I was so certain it was a penalty. It seems the decisions at the moment are going against us”